The image above shows the Broadhurst Theatre on 235W. 44th Street, Broadway, New York in 2007. It was built in 1917 and owned by the Walsall born George Howells Broadhurst in partnership with the Shubert Brothers. He became a very successful director, producer and playwright as well as managing theatres in Baltimore, Milwaukee and San Francisco.

George Howells Broadhurst (left) was born on 3rd June 1866, the second son of George senior and Elizabeth (née Howells). It is thought he  was born in one of the houses that stood behind the Black Boy pub at 37 New Street (Fieldgate). By 1871 George Broadhurst senior had moved his family to number 7, Court 2, Birmingham Street. The census from that year has George senior age 44, a buckle roller, his wife Elizabeth 47, son Thomas William age 13, daughters Susannah 10, Annie Elizabeth 7 and budding playright, 4 year old George.

The photograph below shows the Black Boy pub on the left (note the little girl standing under the window), the image on the the right is the frontage of the buildings that backed onto Court 2 at the top of Birmingham Street. 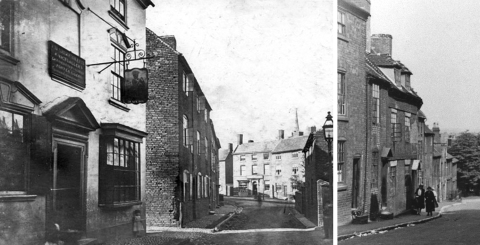 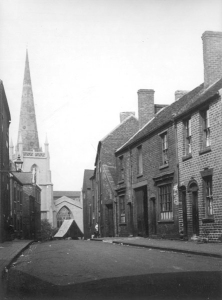 By 1881 the family had moved just around the corner to 12 Temple Street (shown below), which led from New Street through to St. Matthew’s Church as can be seen on the 1920s image below. George senior was now a harness liner in the saddlery trade, the two eldest children Thomas and Susannah had left home leaving wife and mother Elizabeth, daughter Annie, a tailoress and 14 year old George junior whose occupation is listed as “a teacher”, at Blue Coat School, the same school he attended as a pupil.

The map from 1901 shown below, highlights where the Broadhurst family lived, the yellow area is the Black Boy pub, green shows number 7, Court 2, Birmingham Street and the light blue is Temple Street. The purple area indicates St. Matthew’s Church, red what was the Duke of Wellington and light brown is The Wheatsheaf pub, these are shown purely as reference points as they remain today.

Living in the poorer areas of Walsall had an impact on young George and he decided at an early age to strive for something better.

He abandoned his idea of training to be a cleric in 1882 and booked a passage to America. Determined to be a success before he would allow himself to return to England the young George began writing plays, his output was prolific, some of his most successful works were, The Wrong Mr. Wright, What Happened to Jones, The Crown Prince, A Fool and His Money, Why Smith Left Home and The Man of the Hour. Shown below are two posters for different productions of What Happened to Jones (1897 and 1898) and a poster from 1899 for Why Smith Left Home. 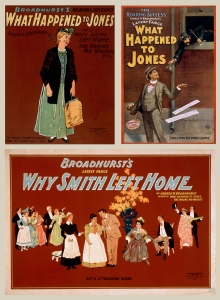 In 1914 they separated, eventually obtaining a “Mexican Divorce” in 1925 when he married Lillian Trimble-Bradley who had been his general stage director since 1919. They had known each other prior to this date as they had collaborated on the writing of several his plays.

It is thought his first visit to Walsall since emigrating was in 1911 as can be seen by the following newspaper cutting from the Walsall Advertiser of 13th September that year.

It is interesting to note the final sentence in this amazing, if true, story, “He ran away to America when only a lad, etc etc.” George Broadhurst senior died in 1902 aged 75 and I am not sure if George junior returned for his funeral.

Just two years later George returned to his home town again, this time to give something back. The Walsall Advertiser of the 11th January 1913 reported: Mr. George Broadhurst and the blind During the Christmas holidays, Mr. George Broadhurst, the well-know American play-right, and an old bot of Blue Coat School, paid a short visit to his mother and sister who reside in Walsall, and the blind people of the town are happier because of his visit. Mr. Broadhurst hearing that the men of the workshop for the blind had each received a Christmas gift in the form of an overcoat, and gave an order for the women to be supplied with long winter coats. He also presented all the workpeople, men and women, with new boots. In addition to this munificent gift he asked the enthusiastic honorary secretary (Mr. A. Brockhurst) to arrange a party and entertainment for all of the unfortunate blind people of the borough, to be held on 22nd January in commemoration of his mother’s ninetieth birthday.

A kind gesture indeed from a man who, with all his success, never forgot his roots. The Mayor of Walsall, Councillor Venables, proposed to honour George Broadhurst at a reception. The Committee unanimously agreed and a date was agreed that a dinner be held in his honour on 30th June 1913.

This visit to England also coincided with the launch of a new play titled “Bought And Paid For” which opened at the New Theatre in London. In September the play moved to the Prince of Wales Theatre in Birmingham and a report in the Walsall Advertiser was less than complimentary about the production. The reporter had picked up on a critique from the Birmingham Mail part of which read: “…… to the English mind that the American practitioner is still dabbling in the crudities of dramatic art. He goes in for broad effects and big scenes and effects a primitive sort of humour. In New York it ran for 476 performances and it has been boomed on this side as “a play with a message”. We have heard this before. Bought And Paid For does to some extent touch the border of an interesting problem but its general tendency belongs to the dime novel order of things, and not a good example of its kind. It is is crude, long-winded and tedious”.  The story line was, in a nutshell, asking for trouble as it attempted to tell the story that when a women marries she does not sell her body and soul to her husband. The Birmingham Post report was just as critical if not more so, they commented: “At any rate, he succeeded only in creating four acts of sententious platitudes, lightened with the vulgarisms, sometimes laughable and sometimes just vulgar”. Sorry George, you can’t win them all!

In 1917 George Broadhurst became a theatre owner. The theatre that bore his name was designed by Herbert J. Krapp and was owned in partnership with the Shubert Brothers. It opened on the 27th September 1917 with a production of George Bernard Shaw’s comedy, Misalliance. George was associated with the theatre until his death in 1952. It remains in the ownership of the Shubert Organization and is one of their most consistently booked venues today. The photograph below, from Wikipedia, shows The Broadhurst theatre around the time of its opening in September 1917.

He staged many plays in his eponymous theatre up until 1924, he continued as co-owner  with the Shubert Brothers up until his death in 1952.

For several years during the 1930s he resided in Monaco and the south of France up until WW2 when he returned to America. In 1942 he was living in Santa Barbara, California and remained there until his death on 31st January 1952. His wife Lillian remained there for a further seven years until her death in 1959.

You are currently reading Broadhurst to Broadway……that’s Broadway, New York! at Walsall Life.