I was born in May 1947 after one of the most severe winters Britain had seen in many years. The date set for my birth was 20th April ’47,  but my mother had other ideas. Dr. Abdul Hadi, mom’s doctor, had to go away and my mother said “I’ll wait for you to get back before I give birth”, such was mom’s trust in Dr. Hadi, who replied, “I don’t think so Mrs. G!”. Dr. Hadi went away and came back nearly three weeks later, mom, true to her word was ready. Twenty days after the original due date I came into to this world at around 3.50 a.m. weighing almost ten pounds. This birth was of course pre NHS and I cost money to bring into this world, below is the invoice from St. Margaret’s Nursing Home. I don’t think Walsall FC were paying that much for players back then…..some say nothing has changed!

In 1900 Sycamore House was home to the Walsall Commercial College which I think later moved to Lichfield Road opposite the Arboretum.

The first 26 years of my life were spent in Sandwell Street, Caldmore in a little terraced house and I have so many memories of growing up in that area. The street was a place to play, not many cars to spoil our game of cricket or football in the late 50s, a quick cry from one of us, “car coming” was sufficient to halt the game and allow the offending vehicle to pass safely. Common sense prevailed in those days. The rugby pitch, Follyhouse Lane, Palfrey Park, Hill Street, Dandy’s Walk, Orlando and Newhall Streets, the cemetery in Bath Street, Bescot, so many places to play and enjoy yourself. Between our houses in Sandwell Street and those houses in West Bromwich Street there was a piece of land separating the two streets, my granddad used it as an allotment and beautiful it was too. The summer months the place was full of flowers and shrubs of all sizes and shapes, buying vegetables wasn’t necessary, they grew in abundance in Sandwell Street and picking something grown by yourself was a real thrill. The sound of  industry was never far away, factory hooters four times a day, with the wind in the right direction Matthew Harvey’s factory came into earshot and the smell of hops from Highgate Brewery filled the air. Every New Year’s Eve the enginemen down Bescot blowing the loco whistles as the clock struck twelve and a week earlier the bloke who lived on West Bromwich Street playing his bagpipes on the afternoon of Christmas Day. Every year my dad threatened to “murder him” as bagpipes were not his favourite instrument, I thought they were rather good and after all, it was only once a year. 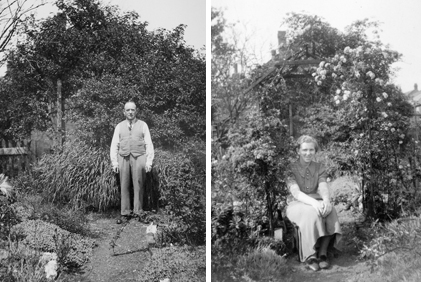 My grandfather, William Moseley and my mother in the beautiful gardens at the rear of 226 Sandwell Street

If you lived in Caldmore back then, Walsall town centre was a place you went for a change of scenery not necessity……or the pictures on a Saturday morning. Millers and Sellars for meat, Stanton’s for fish, Bedworths for fruit and veg’, Happy Anniversary for toys and Graingers for models, Dolmans for pea shooter ammo’ or if you were hard-up, hawthorn berries…….but don’t suck! Seems strange to think nowadays, our favourite games were cowboys and indians or commandos and gerries, not the china sort under the bed, the German sort. We had our own “Stalingrad” set, the remains of houses on the corner of Dudley and Bath Streets complete with cellars, although the set lacked blood and body parts, to us it WAS “Stalingrad”, especially in the winter after a snowfall.

From Whitehall Infants and Junior Schools it was off to the delights of Chuckery Seniors, the price of not working hard or diligently enough! In later years I always referred to the school as The Chuckery Academy For Young Gentlemen and now the schools are called Academies!

Having worked for over 45 years as a graphic designer I semi-retired in 2007 and continued to work from home. Instead of working on commercial projects I concentrated on producing books for local history societies, something I continue to do today. The tally of completed books is now around the forty-five mark. As well as producing books I also enjoy researching local history and collecting old photographs and ephemera about Walsall, and just so I don’t get bored I enjoy painting too, some samples of which you will see as this blog develops.

I began collecting old photographs in the early 1960s when the terraced houses on the one side of West Bromwich Street were waiting to be demolished. One Friday night I decided to explore these now derelict properties. In one house, just down from the opening that allowed access to Caldmore Gospel Hall, I found a bundle of what I now know to be Victorian carte de visites in the cupboard that ran from floor to ceiling in the living room. I thought it was quite sad that someone had  thought these twenty or so images of their ancestors were not worth keeping, I still have them but unfortunately I am still none the wiser as to who any of them are. This discovery one summer night around 1961/62 lit the blue touch-paper as it were regarding old photographs. Over the next fifty-five years or so I have continued to collect images from the past to the point where I now have several thousand in all shapes and sizes, carte de visites, cabinet cards, glass negatives, film negatives both colour and black and white, colour transparencies, postcards and of course photographic prints.

In 2002 I began work on a calendar called Walsall Lives, over the next ten years I produced a further eight editions of the calendar. The problem is you need twelve main photographs (or six, depending on the layout) and finding new ones to illustrate the pages was getting harder by the year. The intention is to continue along similar lines to my calendar with this blog, in other words, text will be supplemented with images and ephemera and anything else I consider to be of interest. In these early days I must say, print is far easier to understand but then I have over 45 years experience in that field in comparison to a few months on websites. Mistakes and edits will be in abundance no doubt but I hope you will stick with me as I attempt this new field.

I hope to make this blog as interesting as possible without relying too much on self-indulgence, let me know if I do. The majority of the material displayed on each post is my own, if it isn’t mine then I acknowledge the owner if known.

One thing I would ask is if anyone takes ANY of the pictures or other material off Walsall Life to use on social media sites or any other sites for that matter, would you kindly acknowledge where the items came from and also give a link back to this site, thank you.There are some very ignorant people out there………please don’t be one of them!