Walsall Imperial Volunteers return from the Boer War in 1901

Anyone that knows this site will have seen the digitised versions of my Walsall Lives calendars and this post alludes to the August page in the first calendar I produced back in 2002.

On 10th March 1900 the Volunteer Service Company, which was only formed weeks earlier, set sail for South Africa. The Company consisted of three Volunteer Battalions of the South Staffordshire Regiment, the 1st Handsworth, 2nd Walsall and the 3rd Wolverhampton.

One of the photographers who recorded the Volunteers return was Arthur Farrington who was probably assisted by his brother Frank, another keen photographer. I have three photographs of the event and the first is shown below showing the large crowd waiting for the soldiers to appear. Note the men and women standing on the small balcony above the main entrance to the George Hotel.

The picture above shows the crowd and dignitaries around Sister Dora’s statue awaiting the arrival of the troops.

The Walsall Advertiser of 25th May 1901 dramatically headed their piece, “Walsall Imperial Volunteers – Home from the war – Enthusiastic Reception – Stirring scenes in Walsall”. As the photographs will show, there weren’t wrong!

The Company arrived in South Africa after a six week voyage and immediately joined up with the Eighth Division with whom the stayed for the duration. From Cape Town they went to Springfontein and the to Bloemfontein. They met up with the regiment at Brestler’s Flats and went with them to Senekal, Willow Grange, Ficksburg up the Caledon to Harrismith. Captain Denton was quoted as saying, ” We were not in any big battles, but we fought at Willow Grange and Senekal, and were at the surrender of Prinsloo. We were thanked for our work by General Rundle in Divisional Orders”. When asked for details of the fighting and similar topics Captain Denton refused to speak, adding “I may open my mouth later!” He also stated that the men under his command behaved very well in difficult circumstances as they had little food and clothes at times.

The force consisted of Captain Denton and Lieutenant Wright, three sergeants, three corporals, three buglers and eighty-seven privates. Two of the privates, Pt. Clarke and Pt. Strathero, were in hospital quarters suffering from enteric (typhoid) fever and were going on to Netley Hospital for further treatment as they were both seriously ill. Two of the sergeants and eight privates came home in April although the article gives no reason as to why this was. A further fifteen men were invalided home and another six had stayed on in South Africa having taken up employment there!

The force arrived back in Southampton aboard the Wilson liner, Idaho and then took the train to Lichfield where they were met by the Mayor. They stayed the night at Whittington Barracks before coming back to Walsall the following day, the men were given the Government bounty of £5 on leaving the barracks.

Then trouble broke out! The members of the force from Wolverhampton wanted to separate themselves and hold a reception and dinner excluding the Walsall and Handsworth contingents. This was very much resented by the Walsall members, the article says nothing about Handsworth! So begins the animosity between Walsall and the Wolves, it appears the Baggies were forgiven!

The Wolverhampton and Handsworth sections went on to Wolverhampton the 2nd South Staffs. detrained at Walsall but not even this went smoothly. They were due to arrive in Walsall at 2.32pm but somehow missed the train, presumably in Birmingham and didn’t arrive until well over an hour later. By this time an enormous crowd had gathered in Station Street, Park Street and on The Bridge and all vehicular traffic was stopped. The nine companies of the Walsall Battalion were paraded at the Drill Hall under Colonel R. S. Williamson and many other high ranking officers. The battalions, headed by the regimental band, set off from the Drill Hall to await the arrival of the returning troops. When the train did eventually arrive the men, heavily bronzed by the South African sun, formed up behind the band ready for the march into town. Many townspeople occupied rooftops and hung out of windows to get a better view of the troops, shouting and cheering as they passed by. Many rushed forward to shake the hands of the somewhat bewildered troops as they made their way up Station Street and onto Park Street and then down to The Bridge. The crowd which had grown considerably from the first picture shown above can be seen in the second of the photographs below. 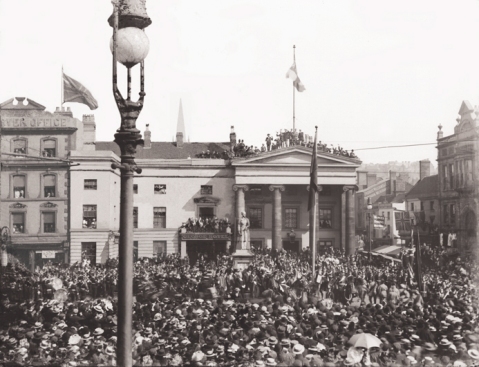 Just look at the people who are standing by now on the highest point of The George Hotel. In the close up below the troops in their khaki uniforms with pith helmets can be seen in the bottom right of the picture. I’ll bet Dance’s Dining Rooms did some trade that day!

The Mayor, Councillor W. J. Pearman-Smith, along with all of the town’s dignitaries were there to greet the men on behalf of the King and the town. In his speech, part of which is quoted, the Mayor commented, “I am delighted to have been afforded this opportunity of publicly welcoming you back to your native town. When I realised that fifteen months had elapsed since I bid you goodbye, I recognise the heavy task you have had, and the fearful hardships, not to say anything of the dangers and risks you have encountered and endured. I offer you my hearty congratulations for the manner in which you have conducted yourselves as brave men and as true British soldiers. The Empire today is proud of her Volunteers”. The speech went on for quite sometime as Councillor Pearman-Smith continued to praise the soldiers before ending with, “It only remains now for me in the name of the King to thank you for your services to your country and to ask you to give three cheers for the King”. The crowd duly obliged!

The third and final picture with the returning troops almost obscured, two can be seen just below Sister Dora’s statue, the close-up below gives a slightly better view.

With the main proceedings over the troops marched along Bradford Street, Wednesbury Road and Corporation Street to St. Michael and All Angels Church, Caldmore. The entire route was lined by thousands of spectators all cheering the returning men along through the heavily decorated streets. The thanksgiving service was conducted by the Captain-Chaplain J. Fenwick Laing, a man very well-known throughout the Caldmore area. At the conclusion of the service the congregation and all those outside sang two verses of the National Anthem accompanied by the massed bands. With the service over the troops headed back to the the Drill Hall via Orlando Street, Sandwell Street, Lysways Street and Ablewell Street finally arriving in Whittimere Street where a refreshments and a grand meal was laid on for the men. Colonel Williamson addressed the men after the meal thanking them all for their loyal service and recalling the happy times along with the sad during their stay in South Africa.

The crowds throughout the day had been enormous but the day passed almost without a hitch (missing the train comes to mind!). The worst accident that had been reported was that which occurred to the little Bandsman Cotterell an accomplished clarinet player aged 13 and the son of Band-Sergeant Cotterell of Cannock. During the crush in Station Street the unfortunate lad dropped his instrument which was then trodden on and broken, apparently beyond repair!

The following list is the names of the men of the Walsall Battalion who went out to South Africa:-

Several of the names listed above did not return, Private Edward Reynolds from Hednesford Company died from enteric or typhoid fever. Lieutenant Edward Smith from Wednesbury remained in De Aar, South Africa holding a staff appointment. He had previously served in South Africa having the medal and clasp for the Matabele war. Lance-Sergeant Patrick Ross also remained at De Aar as canteen steward. Private John Buckley from Hednesford remained in hospital at Britstown recovering from typhoid. Privates Albert Laban, Ralph Smith and George Everiss had been invalided home earlier suffering from typhoid but all had recovered by the time their comrades came home. Private Everiss had recovered sufficiently to join the newly formed Army Cycle Corp and was set to go out to South Africa again. Sergeant Harry Middleton and Privates Titley, Rigby, Reeves and Ingram had returned home three weeks earlier than the main body of the company.

A recent discovery in the 1901 Walsall Red Book is the photograph shown above of the men which is titled “Walsall Imperial Volunteers in South Africa”. Sadly no names accompany the photograph but the majority appear to be Privates although some sleeves are hidden and no rank can be determined. However, the first man on the back row holds the rank of Corporal (either Charles Cook or Edward Wain) and on the middle row, fifth and sixth men along, are both Sergeants and could be Harry Middleton and Patrick W. Ross.

A memorial tablet for all of the men who took part in the Boer War was commissioned. It was carved by Mr J. Lea of the Wisemore and it measures 12 foot in height by 7 foot in width and was said to be a very fine piece of wood carving. In upper portion was the Borough Arms and below that the crest of the V.B.S.S.R. followed by an inscription and the names of all of the men involved finishing off with the name of the Mayor, W. J. Pearman-Smith and R. S. Williamson, Commanding Officer, 2nd Vol. Batt. S.S. Regiment.

A final interesting point was where exactly did Arthur Farrington and his brother stand to take the photographs? Around the time the photographs were taken the buildings that stood opposite The George Hotel were occupied by Lloyds Bank and Ennals Limited, drapers and household furnishers. I would hazard a guess and say the brothers probably stood in one of the offices of the bank as the Ennals premises were slightly further along and not directly opposite The George as the images seem to suggest. Below is a picture of both premises c.1910. Ennals also had premises on the corner of Bradford Street and The Bridge in a building later occupied by Dunn & Co., the hatters.

The other picture (Courtesy of Walsall LHC) is of the same scene some years later and shows Cooles Cafe, also known as the Dora Cafe. In later years it became the well known confectioners and cafe, Pattisons. The site of Ennals was later occupied by the Henrys departmental store. 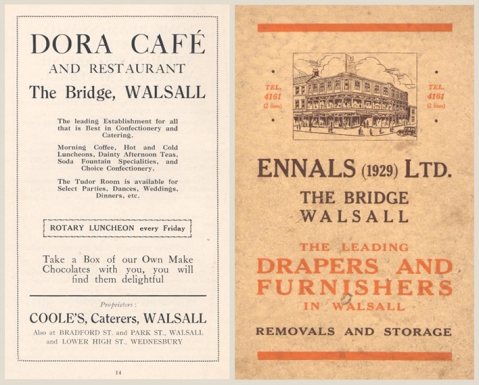 Two advertisements for Cooles and Ennals taken from the Walsall Official Guide c.1930.

You are currently reading Walsall Imperial Volunteers return from the Boer War in 1901 at Walsall Life.