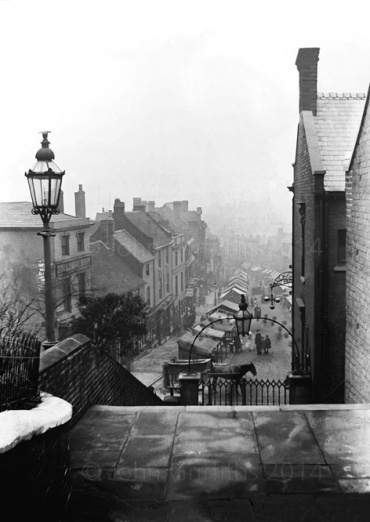 This picture shows a very atmospheric view of High Street, Walsall from St. Matthew’s steps, it was taken around 1905 by Arthur Farrington a member of Walsall Photographic Society. His younger brother Frank Podmore Farrington was also a member of the Society and several of their photographs will be used throughout this blog.

Below are the three Farrington brothers, Frank on the left, Arthur in the middle and eldest brother Charles. The family, from around 1900, ran the old-established company, Eyland & Sons Limited of Lower Rushall Street, more about the company in future blogs.

Two other members of Walsall Photographic Society were the father and daughter duo of Frederick and Freda Alice Blanchard. The name Blanchard will be will known to many in the town as Frederick (1888-1968) was the last headmaster of the old Blue Coat Schools on The Bridge before becoming the first headmaster of the new school in Springhill Road when it opened in 1933. His daughter Freda (1918-2001) was a teacher at both Blue Coat Infants and Junior Schools, the headmistress at these schools was Emily Farrington, sister of the three brothers above.

The two photographs below were taken by Frederick on his quarter plate camera around 1920 and shows St. Matthew’s steps and the market. Unfortunately the one of the market with The Woolpack in the background is suffering from camera shake which detracts from it somewhat, nevertheless, two very atmospheric photographs of the old town now long gone.

On page eleven of The Book of Walsall by Marilyn Lewis and David Woods there is a quote from Sir John Betjeman in 1959, it reads:

“Walsall is a borough which is obviously proud of itself and I thought that if the local council could turn the old High Street into something worthy of the charming and modest buildings, Georgian and Victorian, above the shop-fronts, it could be made into one of the most attractive streets in England. This is the age of local councils. Their increased powers mean that they can make or mar the treasure they have inherited from the past. Local pride can save a place…..short sighted cash considerations can ruin it.”

He knew a thing or two did Sir John……….many realised this and listened, others chose not to and Walsall was one of the latter sadly!

You are currently reading High Street c.1905 at Walsall Life.