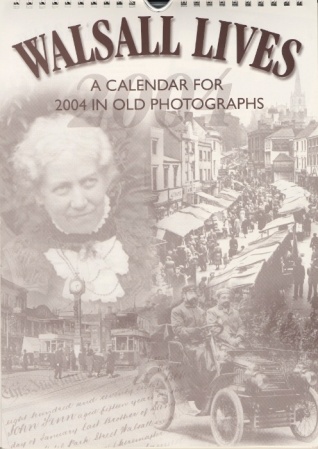 This post shows the third edition of the Walsall Lives calendar in 2004 and the final time it would be published in A4 portrait format, all subsequent editions would be produced A4 landscape.

The cover for 2004 features a lady connected to the Eyland family dressed in mourning clothes around 1900. To her right is a great picture of Walsall market in the days when it had quality as well as quantity and snaked its way up the hill from Digbeth to the very top of High Street. As Sir John Betjeman said in 1959, “Walsall is a borough which is obviously proud of itself and I thought that if the local council could turn the old High Street into something worthy of the charming and modest buildings, Georgian and Victorian, above the shop-fronts, it could be made into one of the most attractive streets in England. This is the age of local councils. Their increased powers mean that they can make or mar the treasure they have inherited from the past. Local pride can save a place…..short sighted cash considerations can ruin it.“

Sadly no one in authority was listening!

The Bridge on a busy day in the 1920s fills the bottom left corner along with a section of an apprentice indenture for John Fenn, son of the landlord of The Priory in Park Street. Although not the first car to grace the streets of Walsall it was the first registered car to take to the streets. The picture shows Charles Gameson, grandson of Thomas Gameson, with his chauffeur in his 1902/03 Wolseley bearing the number plate DH1, still seen around Walsall on the Mayor’s official car. END_OF_DOCUMENT_TOKEN_TO_BE_REPLACED 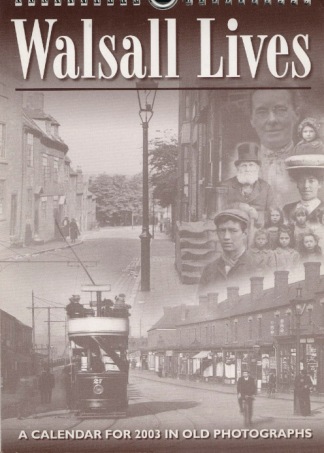 The second edition of Walsall Lives Calendar followed in 2003 in the same format as the first one. One of the pictures on the front cover is a particular favourite of mine, the one in the top left showing Birmingham Street in the 1920s. Growing up in Sandwell Street this area of Walsall was well-known to me from an early age as it was my mother and grandmother’s route to and from “the town”. As a small boy the well-worn steps that can be seen in always fascinated me, “how old must this street be to have steps that have worn away that much” was the question I asked myself. The buildings on the left side had long gone when I was a boy, I think they may have been demolished in the 1930s when Gorton’s Yard and all of the area around St. Matthews was cleared but the buildings on the right remained until around the early 1960s. Past the building on the right side, where the trees protrude, were a couple of 1930s semis and one of them housed a name well-known to Walsall folk, that of Scoltock. The name around Walsall was synonymous with chimney sweeping from the mid-nineteenth century and quite possibly earlier. Neighbours of the Scoltocks were the Tonks family, my mother told me that Jack Tonks was a foreman over the seals department (I think) at the Walsall Lithographic…..she should know, apparently he was her boss when she worked there before WW2. Across the bottom of the cover was a picture of Wednesbury Road, Pleck, in 1912 taken from near the junction with Hilary Street. END_OF_DOCUMENT_TOKEN_TO_BE_REPLACED 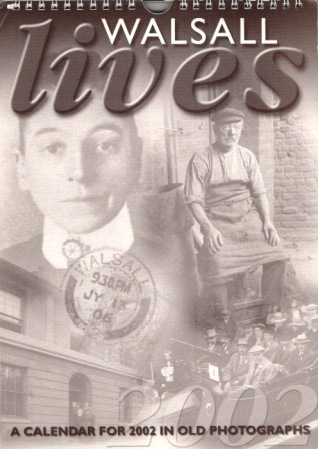 Town utilising my collection of old images, memorabilia and ephemera. Between 2002 and 2013 eight calendars were produced but not consecutively as some years I simply ran out of new material. The calendar was always well received and I rarely had any left come the end of December, that was probably thanks to Dr. Carl Chinn! For the first three years he invited me onto his now sadly, defunct radio show to talk about the contents of each calendar, with Carl’s enthusiasm and my ability to talk for England in the right company, we had a great time. Thanks for that Carl!

In recent posts on my blog I have included a couple of old calendar pages which have seemed popular so I thought I would post them for people who hadn’t seen them first time round. Several of the pictures have already been used in various posts on the blog already but now you will see them in their original calendar format. Although the post is mainly illustrative I hope you will find the old images, ephemera and memorabilia interesting. END_OF_DOCUMENT_TOKEN_TO_BE_REPLACED

Cold enough for a hairnet missus….memories of Caldmore 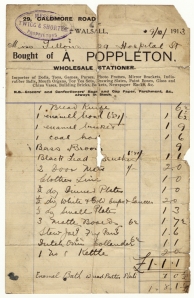 Since beginning this blog some months ago it has been my intention to produce a post about Caldmore, the place where I grew up and had a cracking childhood. My family associations with Caldmore ended with the death of my mother in November 2006 when I was fifty-nine years old. My mother was born at 226 Sandwell Street and lived the rest of her life three doors up at 220, her parents, William and Mary (Lizzy) Moseley began the Sandwell Street family connection way back in April 1915 when they married and move into their new home.

Things were much different 101 years ago, see my grandma’s bill from A. Poppletons at 29 Caldmore Road and look how much she purchased for £1 8s 1.5d (approximately £1.40p in decimal currency) in 1913. Prior to her marriage my Gran’ was Lizzy Fellows who lived in Hospital Street with her parents and nine siblings, she worked in Caldmore at The Summit buckle works in New Street, opposite Dandy’s Walk. END_OF_DOCUMENT_TOKEN_TO_BE_REPLACED

You are currently viewing the archives for October, 2014 at Walsall Life.